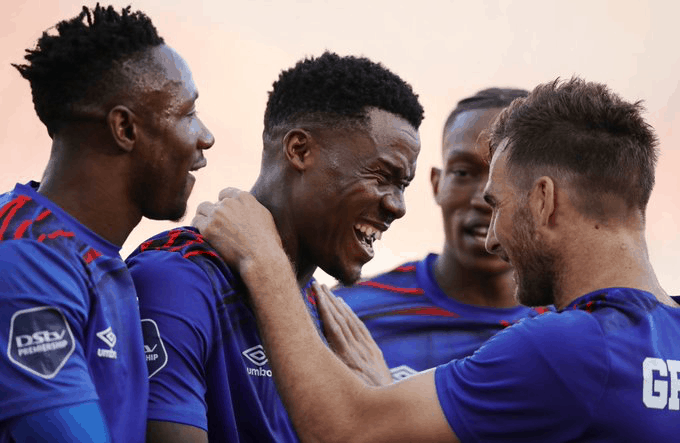 In Saturday’s DSTV Premiership action, Bradley Grobler scored a brace to help SuperSport United move up to third place on the table, while Cape Town City moved up to fourth.

SuperSport beat Baroka 3-1, while City were 3-2 victors over TS Galaxy.

Golden Arrows and Mamelodi Sundowns couldn’t be separated, and neither could Kaizer Chiefs and Bloemfontein Celtic, with both games ending 1-1.

SuperSport jumped up to third spot on the table, with a third consecutive win, when they beat Baroka 3-1 at the Peter Mokaba Stadium.

SuperSport took an early lead through the in-form Bradley Grobler, when he finished off after being set up by Gamphani Lungu.

Baroka were level in the 70th minute, through an own goal conceded by Grant Kekana.

Thamsanqa Gabuza grabbed the lead for SuperSport again in the 88th minute, heading in from close range.

Grobler wrapped up the result, scoring in stoppage time to get his brace, and seventh of the season.

Arrows and log leaders Sundowns maintained their unbeaten records in the DSTV Premiership when they drew 1-1 at the Sugar Ray Xulu Stadium.

Mothobi Mvala headed Sundowns into the lead in the 17th minute, a goal on debut from the former Highlands Park player.

Both teams battled for a winner, and Arrows, who perhaps had the better chances in the second half should maybe have had a penalty just before full time, after Dennis Onyango used an elbow illegally, but it wasn’t given.

City beat Galaxy 3-2 at the Cape Town Stadium, thanks to an action-packed first half.

The home team were in the lead in the 11th minute when Surprise Ralani took advantage of a defensive error and chipped Wensten van der Linde to open the scoring.

However Galaxy were level three minutes later, when Mxolise Macuphu shot past Peter Leeuwenburgh in the City goal.

Galaxy were awarded a penalty in the 30th minute, after a handball in the box, and Macuphu made no mistake, beating Leeuwenburgh again.

Mdu Mdantsane scored his fifth goal of the season, also from the penalty spot, to equalise for City in the 38th minute.

On the stroke of halftime Tashreeq Morris was on hand to tap in after an error from van der Linde, to put the home team back in the lead.

After five goals in the first 45, the scoring dried up in the second half, but City were able to hold on for a good win.

It was a share of the spoils at the FNB Stadium, as Chiefs and Celtic played to a 1-1 draw.

Chiefs were in the lead in the 8th minute when an unmarked Anthony Akumu Agay headed in Khama Billiat’s cross.

Celtic were level in the 67th minute after an excellent finish from Tumelo Mangweni, who beat the off side trap to equalise.

It was another disappointing result for Gavin Hunt’s team, who are win-less since the 27th of October.