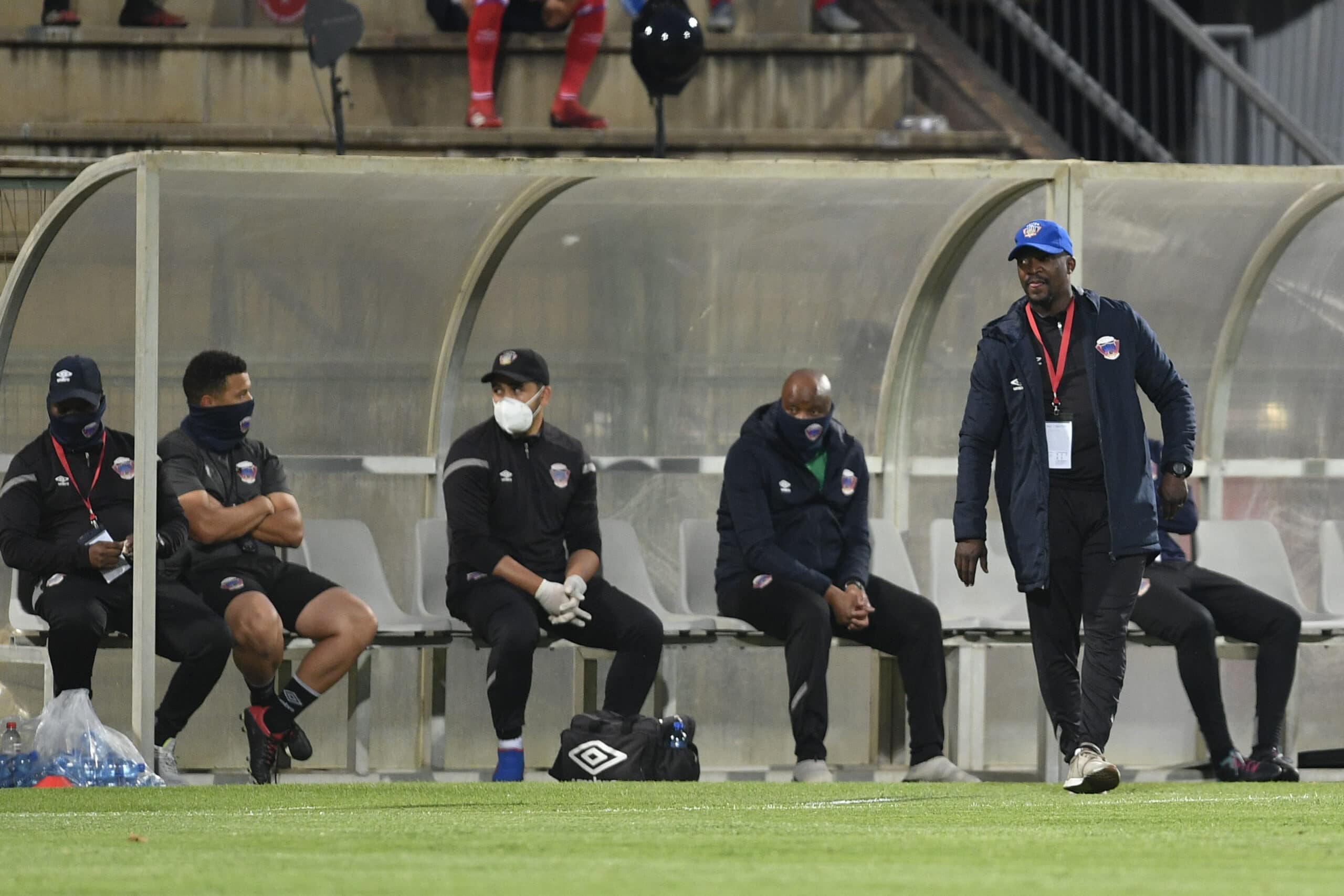 After an unbelievable 66 coaching changes over the last seven months of PSL football, Rob Delport asks whether SA football should follow Brazil and restrict the amount of coaches a club can employ each season.

This article, which has been abridged, first appeared in Edition 24 of iDiski Times. For more news, features and interviews get a copy of the latest edition at your local news outlet.

Over the years as a journalist covering football games, I have met a LOT of coaches. Being based in Cape Town, we have always had six or seven professional clubs, usually two in the Premiership, and four or five in the NFD, and when journalists were allowed to attend games before covid-19 restrictions, I would attend almost every game.

It was usually around four or five games a week during the season, sometimes more. And after every match I would interview the coaches, so as I said I’ve met a lot of coaches. As you may also be aware of, in South African football, at many of the clubs, and some more than others, coaches don’t last too long. So in some seasons there’d be two-three coaching changes at a club. And of course between appointments, there would be interim coaches. Like I said, I’ve met a LOT of coaches.

Which leads me to the question, or reason for this article – are so many coaching changes ruining our football? And should South Africa follow what they’re doing in Brazil?

Brazil has had a similar problem over the years, with club’s chopping and changing coaches so often in the South American country, that football coaches are bit like the tourists, just visiting.

But earlier this year the Brazilian FA and their clubs agreed on a landmark decision to restrict coaching changes to just one throughout the campaign. The new rule comes in after dozens of sackings in the Campeonato Brasileiro Série A. Before this decision, like in most countries, there had been no such restrictions in the Brazilian League when it came to the hiring and firing of coaches. Last season only three clubs had the same coach in charge throughout the whole season, with most teams having three or four in charge.

“It is a great advance for Brazilian football, which will do good for both clubs and coaches,” Brazil Football Confederation President Rogério Caboclo said.

“It will imply a more mature and professional relationship and allow for longer and more consistent work.

“It is the end of the coaches’ dance in Brazilian football. It means administrative organisation and financial planning.”

This is not the first time this idea has been proposed, but this time around eleven of the twenty clubs voted in favour of the decision, and it will is part of the rules for the new season that kicked off in Brazil last month.

In the DStv Premiership, six teams have currently retained the coaches who began last season with them. There has been 30 different coaching changes at the other ten clubs (including interim coaching stints).

Manqoba Mngqithi and Rulani Mokwena (Mamelodi Sundowns), Brandon Truter (Swallows), Josef Zinnbauer (Orlando Pirates), Kaitano Tembo (SuperSport United), John Maduka (Bloemfontein Celtic) and Steve Barker (Stellenbosch) are the six in question. Barker has been in charge for almost four years, Tembo is around three, Zinnbauer and Truter are closing in on two. Maduka and the Mngqithi-Mokwena combo all took charge in the last year.

In the GladAfrica Championship, five teams still have their coaches who started the season in charge, but there has been 36 different coaching changes at the other eleven clubs.

Nditsheni Nemasisi* (JDR Stars), Kabelo Sibiya (TS Sporting), Tlisane Motaung (AmaTuks), Roger De Sa* (Cape United) and Jomo Sono* (Jomo Cosmos) and are this season’s lucky survivors. *Three of the five are also involved in the club’s ownership or management, so are unlikely to just be fired. Sono has been in charge since before most of his players were born, Nemasisi is the founder of his club, Sibiya took charge last year, Motaung took over at the start of the new season, as did De Sa, who returned for a second stint, after being behind-the-scenes for 18 months.

So should South Africa have a similar rule?

Personally I think it could be good for clubs to show more forethought before appointing or replacing a coach, and to show more patience during a slump.

It also allows for a coach to have the security to know he can potentially build something at a team, and not just seek instant success. Some times the route to a successful team takes a coach on a bumpy path at first.

Very often I have seen a new coach come in and bring instant success to a struggling team, but I can also see they are actually just applying a band-aid to something that needs far more attention, and the fix is only temporary.

There is a strong opinion that the constant changing of coaches also interferes with the development of our footballers. The secret of successful coaching is actually simple, get the players you have to perform to their optimal ability. When a coach is given time to actually get to know his players, their strengths, their weaknesses and their personalities, the players generally perform better.

When I’ve spoken to a number of current and former players about their formative years, most of them recall a coach or two who played a major role in their development, and early career. However more recently when speaking to some of the current crop of up-and-coming players, I often get a list as long as a team-sheet!

Muhsin Ertugral, who is well known for giving young players a chance at club level, told me he has never worried about job security in his career, especially in South Africa. The Turkish-born coach is well respected around the world, and is never short of job offers. He told me it is why he was never worried about giving a young player a chance, as he was confident he would be there to see the development process through.

“Ja, you have only possibility of two coaches, and that should be enough,” Ertugral told iDiski Times.

“I mean, everybody’s a coach in this world of football today. And today, the whole thing it gets more complicated as a head coach, compared to years ago. So I think that was very bold and very right decision that should be implemented everywhere in the world, in my opinion.

“Because a coach is an expert on this area, and today’s coach, like a CEO, you have to speak many languages you have to manage. And the English version of manager is actually the right one, as the coach. And  the demand today on a head coach is really 24-7, it’s a job that is like a company CEO. And I think it proves well that the coach is an important figure you see…

“And the Brazil version is fantastic. I hope that everywhere in the world that can be implemented.”

Ertugral says clubs think chopping and changing coaches will be the solution, but quick-fixes aren’t the answer.

“No coach has a magic stick. It’s about consistency, consistent working,” Ertugral continues.

“And you must also see players, the players needs to understand what the coach wants. And this is always a difficult issue. I think a great decision. I mentioned that many, many weeks ago in my column.”

Recently I also spoke to Roger De Sa about his this, and he mentioned to me about his time at Ajax Cape Town, and he said to me had he not felt very secure in his job at the time, he might not have given Rivaldo Coetzee the early opportunities that he did.

I asked the former Ajax, Pirates and Bidvest Wits coach about the Brazilian’s decision, and he likes it, and says clubs have to learn be patient with coaches if they want long-term success.

“Absolutely, I mean who how long was Klopp at Liverpool before he won anything?” De Sa told iDiski Times.

“You know, Liverpool was a sleeping giant. And he won everything last year and then he’s having a torrid time, but they’ve got to keep him, they’ve got to believe and carry on.

“But you know it’s kind of sad. Our culture in this country, or in the continent, wherever, we’re very quick to just blame the coach and move on.

“Just get another one, that’s the easy part, and then hopefully the results change, and I mean certain clubs just do it all the time.

This article, which has been abridged, first appeared in Edition 24 of iDiski Times. For more news, features and interviews get a copy of the latest edition at your local news outlet.